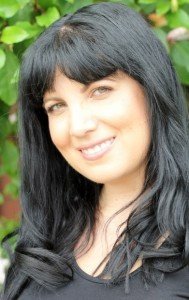 I first read Love at First Flight last year, when it was released as an e-book and was completely captivated by the chemistry between the two main characters, Mel and Matt, who meet and fall in ‘lust at first sight’ while sitting next to each other on a flight from Perth to Sydney.

Problem is – Mel is a married mother of two, and Matt is in his twenties and engaged to be married. But the pair just can’t stay apart, even though acting on their attraction threatens devastating consequences for them and their loved ones.

The book is steamy and sexy but also presents the real angst of infidelity. Not surprisingly, it has gone on to win a huge legion of fans and was voted Aus Rom Com’s Readers Choice Book of the Year for 2015.

In the face of such undeniable popularity Harper Collins has taken the unprecedented step of releasing ‘Love at First Flight‘ as a print book – a first for the publishing house and a huge compliment to its author, Tess Woods, a woman who is a complete force of nature.

The path to publication for Love at First Flight is an extraordinary tale of persistence and I hope you enjoy reading this interview as much as I did! 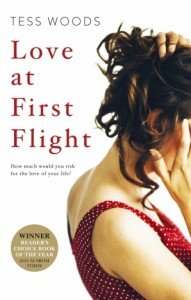 Let’s go back to the start. In your acknowledgments, you say this book was rejected 23 times, so I’m dying to know – what was different about the 24th?

Twenty-four was actually the first agent I sent it too! I was desperate for Jacinta di Mase to be my agent and I sent her the manuscript before I sent it to anyone else. In my letter to her I told her that I wanted her more than anyone else to be the one to represent me and I asked her if she wanted the MS exclusively or if it was okay to submit to other agents at the same time. She said ‘go ahead and submit elsewhere while I’m reading it, I don’t mind.’

So I then submitted it to the other twenty-two Australian agents who were accepting commercial contemporary fiction at the time. All twenty-three, including Jacinta, rejected it. Some were standard rejections but twelve of them read the entire book and ummed and aahed for a while so my anxiety levels were sky high.

Jacinta took six months to reject it because she really liked my style but she had huge issues with certain parts of the plot. I was devastated when her rejection letter arrived but two years later out of the blue, she emailed me again and said ‘I can’t get your book out of my head – do you want to iron out those plot issues for me and then I’ll represent you.’ It was amazing! Best email ever!!

What I look back on now and marvel at is that I never once considered submitting the MS to a publisher, I just knew I had to have an agent so I left it sitting there for two years literally under the spare bed while I tossed up whether to try international agents or not and I must have just left it sitting there with some intuition that my agent was still out there which she certainly was!

Conventional wisdom says that readers don’t like stories about affairs but ‘Love at First Flight’ has blown that out of the water. I’m sure you’ve now received loads of reader feedback – and I’d love to know – what is it they’ve told you they’re responding to?

I found this piece of apparently well-known wisdom out AFTER I wrote the book! For me personally books like Tully, The Horse Whisperer, The Bridges of Madison County were among my all-time favourites. They were movies, they were acclaimed so I thought there was no issue with writing about affairs. Hmm, that was wrong! I received some incredibly harsh and some incredibly personal attacks for writing about an affair and I even had a big five publisher refuse to even see the MS my agent submitted because it had an affair in it. Many of my author friends told me they already knew it was taboo to write about infidelity and wouldn’t go near it themselves with a ten foot pole.

But yes, overall, the response from readers has proven that it is actually okay to write about affairs as long as it’s done with some self-awareness by the people having the affair and that there are consequences. I think what readers liked about Mel was that she was truly tortured. What they thought of her, she already thought of herself so it made her relatable. And also it was a cautionary tale not a ‘hey go have an affair – it’s fab!’ book.

When I wrote the book it was intended as a book about marriage not affairs. In my opinion all the real action started halfway through the book when the affair was done and dusted and then it was time to really sink our teeth into, so now what happened in the marriage?

I understand you went back and edited the book again before it went into print. What needed to change? Is there a difference between editing for e-publishing and editing for print?

Yes we did a full structural and copy edit all over again for the print release. For the eBook we did two structural edits and that was it. For the print version we did a last structural edit and then a copy-edit and then a proof-read so it was much more thorough. I guess that’s because the stakes are so much higher with getting a print book out there that HCP were prepared to invest so many more hours of staff working on it.

Let’s talk about sex. The love scenes in this book are super hot. What’s your secret?

Haha, my hubby will tell you it’s all him! I’m a big believer in writing sex scenes and not fading to black when it’s time to get down and dirty because sex scenes reveal so much about characters. If you’ve visualised them having sex and you know what turns them on, you know them so much more intimately. So I wanted my sex scenes to be real and gritty. I also have real issues with flowery language so body parts are called what they are anatomically named and actions are described as they occur – no throbbing manhoods or pulsating members to be found in my writing! And ONE scene was inspired by real life events that my husband can rightfully swing medals around his neck for but I’m never revealing which one!!

While we’re on the subject of secrets, you’re also a complete gun on social media and you’ve shared lots of your tips. But – I’d like to know – have you made any mistakes along the way that you could share with us (as a cautionary tale)? Also, what mistakes have you seen (nameless) others make?

Ah so many mistakes! I think my biggest mistake was saying yes to everyone who asked me to read their book. Early on, because I’m a voracious reader, I decided to make myself known for being a reader as much as a writer and I reviewed books. My reviews on social media attracted attention and before I knew it was being submitted tonnes of books to read from authors all over the world. I didn’t want to let anyone down so I said yes to everyone and ended up completely overwhelmed and stressed and with no personal choice of what I actually wanted to read. So I pulled the pin on that after about six months when my friends Rachael Johns and Natasha Lester came over for dinner and I was moaning about a book I was stuck reading that I hated but had promised to review and they both quite literally yelled at me to stop accepting books from authors!! Now I just read what I genuinely want to read and I have a strict ‘don’t ask me to read your book because I will say no’ policy.

I also made the mistake of getting into long drawn out conversations with loads of aspiring writers that took up great chunks of my time so now I mostly answer a few questions and then direct people to my writing tips on my website. I think being a bit of a pleaser lands me into these kind of messes, I hate saying no to anybody but end up stressed and with no time.

The biggest mistake I see in others is social media content that is all me, me, me. You need to be interactive and invest in others, not just get on social media to push your book onto people and get off again without giving anything back. Social media is a powerful venue for sales if you are genuine and actually plan on using it the way it’s meant to be used as a way to make real and meaningful connections with people.

The book’s written in first person POV but it alternates between the two main characters – can you tell me why you went with that structure and what you think it achieves?

It wasn’t a thought out decision at all, it was just the way it happened. I found myself sitting there writing in first person and all of a sudden the next chapter was Matt’s not Mel’s – it actually took me by surprise to be writing as a man and I found his voice very difficult to reach. I kept sounding like the middle-aged mum I am rather than a young man in his late twenties. But I think in the end when I finally channelled Matt’s voice it really worked because it brought a whole new very personal perspective to the story that otherwise would have been missing if it was written in third person. I used this formula for my second novel Beautiful Messy Love except this time around it’s still in the first person but told from four people, two men and two women.

I understand your next book is a sequel to ‘Love at First Flight’. What inspired you to continue the story? Could it become a trilogy?

It is a sequel but it’s not about Mel and Matt, it’s about Mel’s children Nick and Lily who were nineteen and eighteen at the end of the first book. The new book Beautiful Messy Love picks up their story four years later when both are in their twenties and finding their feet as adults. I felt that these kids hadn’t shared their story yet and I really wanted to explore what happened with their lives when they grew up. But no, no trilogy. Book two is where I leave the Harding family behind. The third book I have planned involves a completely different set of characters!

Thanks Tess for stopping by on Book Birdy! And all the best with the print release of ‘Love at First Flight’

For more information, or to order a copy of Love at First Flight (released in print on July 25 2016) visit Harper Collins 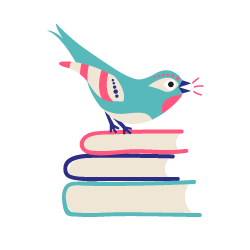 Sign up for the newsletter and receive a free copy of Cuthbert Kitchen - Sweet and Savoury
Your information will *never* be shared or sold to a 3rd party.